What Happens If You Never Change Your Car’s Oil? 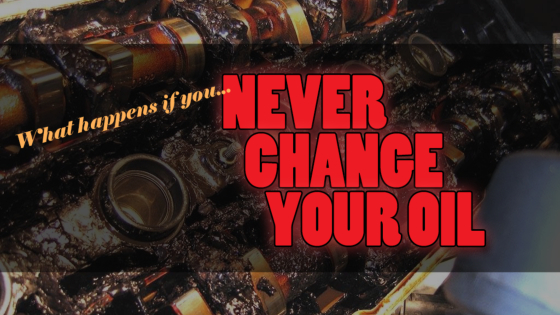 A dealer friend of ours recently recounted a terrifying tale in which the protagonist failed to change his oil over the course of 8 years. We’ll spare you the gory details, but know this: the story didn’t end well for the owner of that poor car.

So, let us ask you: When’s the last time you changed your engine oil? If it was when St Louis still had a pro football team, we’re here to push you into the service center, like, yesterday. You don’t even want to know what happens to an engine when its oil and filters aren’t changed (but we’ll tell you anyway).

When to Change Your Oil

First, you need to know when to change your oil because “never” is not an acceptable length of time.

Although the traditional rule is to change your oil every 3,000 miles or 3 months, modern vehicles are typically a bit more lenient, requiring you to get an oil change after 5,000-plus miles. While that extended maintenance time is nice, it can also cause unintended consequences—namely forgetfulness camouflaged as peace of mind, leading to a missed oil change here and a skipped oil filter replacement there.

That forgetfulness can be troublesome, as you may suspect.

Clean oil lubricates the engine and its components, reducing friction and allowing for smoother operation. The dirtier the oil, the more abrasive it can be to engine components and the engine itself. Even though old oil still has lubrication for these parts, it’s far from adequate at preventing engine wear-down.

It may be negligible, but engine noise will become a bit louder as your oil deteriorates and thickens. Loud engine sounds can be caused by any number of issues, but one of the main culprits is usually dirty car oil.

You’ll find numerous chemical additives in engine oil, including dispersants, rust-busters, and anti-friction detergents. These additives, as the oil degrades over time and due to dirt accumulation, will also degrade, resulting in lackluster lubricating qualities.

As you’d expect, worn engine components can reduce your car’s ability in general. For instance, worn steel camshafts and cylinders can cause the engine to shudder when shifting. This, in effect, reduces your fuel efficiency, which means — yikes! — additional stops at the gas station.

Thicker oil also reduces its ability to draw heat away from the pistons and engine itself, eventually forcing it to run hotter than was intended. Eventually, that hot environment may degrade the quality of certain parts or even warp critical components like a gasket, ultimately forcing you to replace affected auto parts sooner than expected.

Worse yet, those damaged parts may not even be noticed until it’s too late!

As oil travels through the engine, it picks up miniscule pieces of dirt, debris, and particles that get through the oil filter. Over time, those particulates begin to outweigh the oil itself, resulting in that disgusting dark sludge. The sludge can become so dense it lodges itself into essential engine components, reducing the car’s efficiency or worse—it’s ability to even start. (Think: Thick beef grease lodged in your kitchen sink’s pipes.)

The additional metal-on-metal friction will severely compromise your engine wherever possible. (Cars are finicky like that, huh?) Once the components begin to deteriorate, there’s no looking back. You’ll begin noticing drops in electrical power, leaks, dash lights going off, and engine seize-ups occurring at a rapidly growing pace. Once the engine begins to seize, your vehicle may be beyond repair!

At this later stage, an oil change is the last of your worries. To get up and running again, you’re looking at a very expensive engine re-build or an entirely new car. Don’t be forgetful—be forget-less, and change your oil regularly!
change your oilengine oil changeoil change tips

Oil changes: Are they really better at an express shop?

How to keep your car cool!

Pros & Cons: Selling Your Car to a Dealer vs. Private Buyer