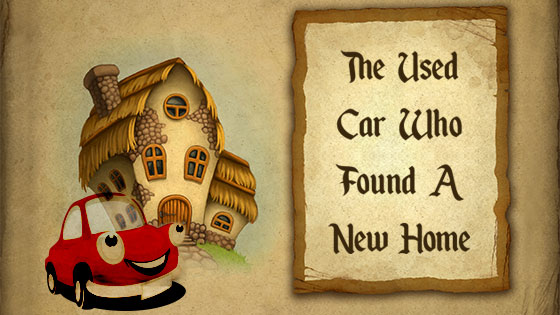 Once upon a time, there was a nice used car, sitting in a nice used car lot, waiting for a nice new owner. He waited and waited and waited, through rainstorms and cold nights and foggy mornings—all for a chance to find his new forever-home and prove that used cars like him were still fun to drive and reliable four-wheeled pals.

It wasn’t always like that, though. The used car once had an owner and a garage to call his own. He sang along to songs on the radio, took weekend road trips, and even visited the kids’ soccer games. But over time, those songs were left unsung, road trips untraveled, kids’ soccer games unvisited.

You see, his owner got older, and as owners get older, so too do their children. Once the reliable family vehicle, that used car was replaced by a bigger, stronger, and newer SUV that could keep up with the family’s busier life. So, the used car sat in the garage, through rainstorms and cold nights and foggy mornings, unable to make a peep.

Then, on a bright September morning, he heard the familiar jingle and jangle of keys. His owner flipped open the garage door, slid into the driver’s seat, and turned the ignition. That used car, through his excitement, revved his engine and purred to life. He coasted around the neighborhood cul-de-sac and rumbled down the highway—all the way to the used car lot.

And there he waited, dreaming the grandest of dreams every night when the dealership’s lights dimmed low. He’d dream of new garages to sleep in, new cul-de-sacs to circle, new songs to sing along with.

But mostly, his dreams were of all the things he’d say to anyone who patted him on the hood and looked through his window. He’d holler from the mountaintops all the benefits of buying a used car like him, and he’d do so every second of every day until he found a new family. But with each sunrise, he realized his dreams were dreams and he couldn’t make a peep. How was he going to explain to people why buying a used car like himself would be a wise choice? He lost all hope of finding a new home.

Until one day, he heard a familiar sound of clinking and clanking and jingling and jangling. There, in his side-view mirror, he saw the twinkle from a set of keys. Had his dreams come true? Was this the day he’d set off on his new adventure?

A woman slid into his driver’s seat and turned the ignition. So, he did the only thing he could think of: he revved his engine and purred to life, just as he used to with his last owner. As they drove off the lot, she flipped on the radio, and that used car sang all the way home to live happily ever after with his new family.

The moral of the story: there’s a perfect used car out there for everyone—even you. So, go out and adopt one today.
buying a used carused carsused vs. newwhy buy used cars

Get Your Car Road Trip Ready

What you need to know about your car