Who's Who at the Car Dealership? 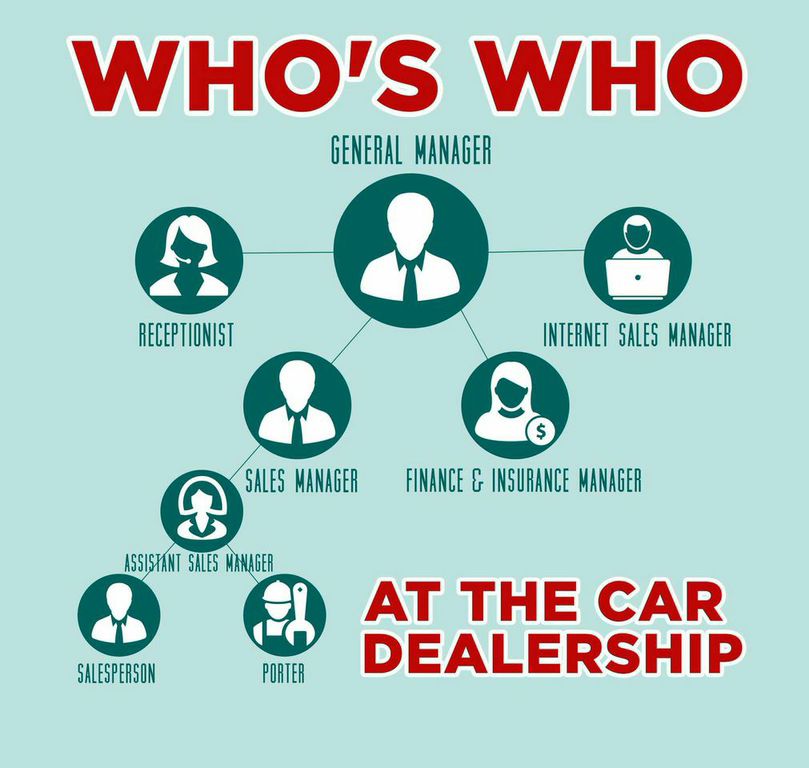 When you think of a car dealership, what typically comes to mind? In my experience, most people think about pushy car salesmen…and not a whole lot else! Well folks, more often than not, the whole “pushy car salesmen” thing is just a false stereotype. And pushy or not, there is SO much more to a car dealership than the sales team. After practically growing up in a car dealership, I’ve come to know the ropes pretty well. I find it so helpful to know who’s doing what within the dealership structure, and I think you’ll find it very insightful too! So without further adieu, here’s who’s who in the dealership! The Salesperson Let’s start with who you do know: the salesperson! This man or woman gives you your first introduction to the lot, answers your questions about vehicles and usually rides along with you in test-drives. They’ll be the one to negotiate with you on the car sale. They know the ins and outs of cars and will be a huge help in the initial process. Once you’ve decided on a car, they will start up the financing and credit application process, but your relationship usually ends there! The Assistant Sales Manager  The assistant sales manager is boss to the salesperson you deal with at the dealership. This person will join you in your car buying process once you’re settling on a price and closing the deal. Still, they’re not the one with the full power to decide the price of the car — they have to get approval from their boss, in the end. The Sales Manager The sales manager holds a lot of power at the dealership. As manager over the assistant sales manager, he or she is in charge of setting prices on all the cars on the lot. Yet most buyers never actually speak with this person! Whomever you deal with in the car-buying process will ultimately have to get a final approval from their sales manager. Just knowing that there is someone else in the process is important! The General Manager This guy completely runs the show at the dealership. He or she is the highest rank among all the various departments. The general manager is your go-to person if you’ve had a problem that can’t be resolved by anyone else, whether it’s in the service or sales arena. The Finance and Insurance Manager When you’re talking nitty gritty numbers for the purchase of your car, the finance and insurance manager is the one to consult. They’ll be the one making sure your financing is all set straight, from interest rates to payments. They print the final sales lease or buyer’s contract and deal with other fees like extended warranties, protection and add-ons. The Internet Sales Manager If you’re in the market to buy a car with the click of the button, you’ll be dealing with the internet sales manager. This person deals with all sales that happen over the car dealership’s website. They will be answering emails, doing online chats and negotiating pricing. You don’t ever have to even meet with the internet sales manager in person if you don’t want to! But this person usually does have plenty of face-to-face interaction when shoppers want to test-drive the car they’ve researched online. The Receptionist Though it may not seem like a big role, the receptionist really does hold quite a bit of power in the dealership. This person is the gatekeeper to anyone you want to talk to at the dealership, whether you’re in person on on the phone. The receptionist may not be the biggest expert on cars, but they’ve certainly soaked up some knowledge by being surrounded by cars every day — so don’t assume that he or she is clueless! The Porter These folks deal with everything that happens after you make the car deal official. They’ll give your car one final cleaning, get it off the lot and even deliver the car to your home, if you make that request!
Auto News 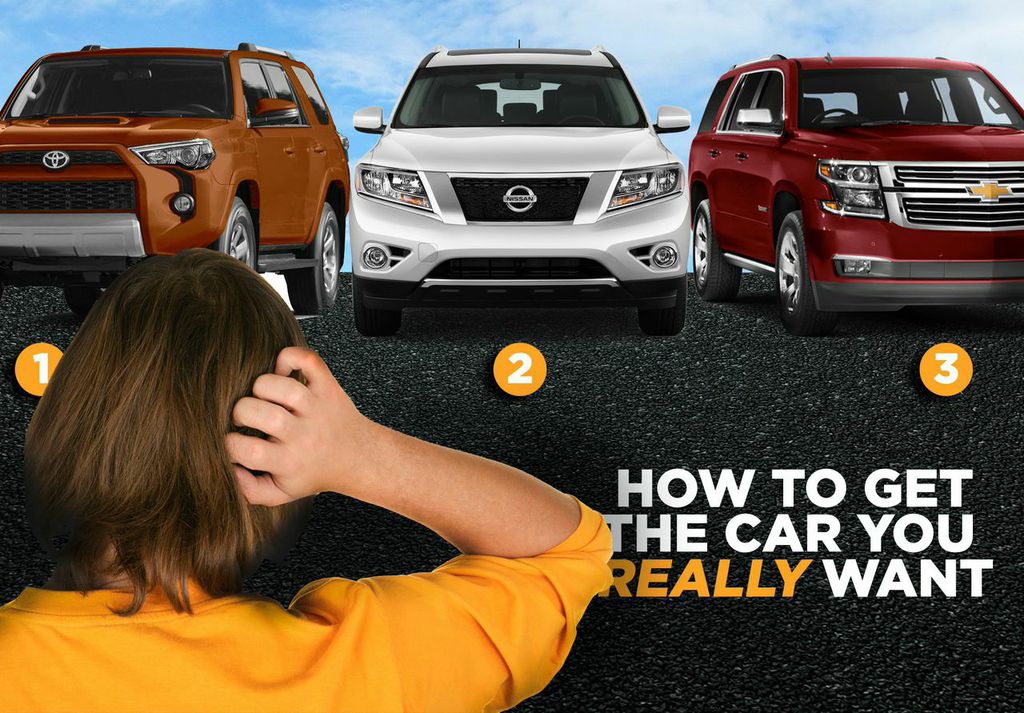 In the new year I’m willing to be that many of you are ready for a fresh start. And you might even be looking for a fresh start with your car! Though it’s a big purchase to make, the beginning of the year is a great time to be in the market for a new vehicle. You’re refreshed with the start of a new year and most likely resolved to set budgets, priorities, life goals, etc! I put this post together to help you avoid the overwhelming feeling that often comes with car shopping. Even though most people have a few ideas of what they want in a car, sometimes they end walking away from the dealership unsatisfied. I think this usually happens because people haven’t done their due diligence, and they get confused along the car shopping journey. Hence, I’ve made this outline to help you through the car-buying process. If you follow these steps, you’ll avoid much of the stress of car shopping. Take it slow, don’t skip any steps, and you’ll be on your way to new car happiness! After buying, it’s time to put the pedal to the metal and enjoy that new ride! Your new car is going to play a huge role in your life, so the experience should be a pleasant one. I hope these tips help!
Good Works, Local Events 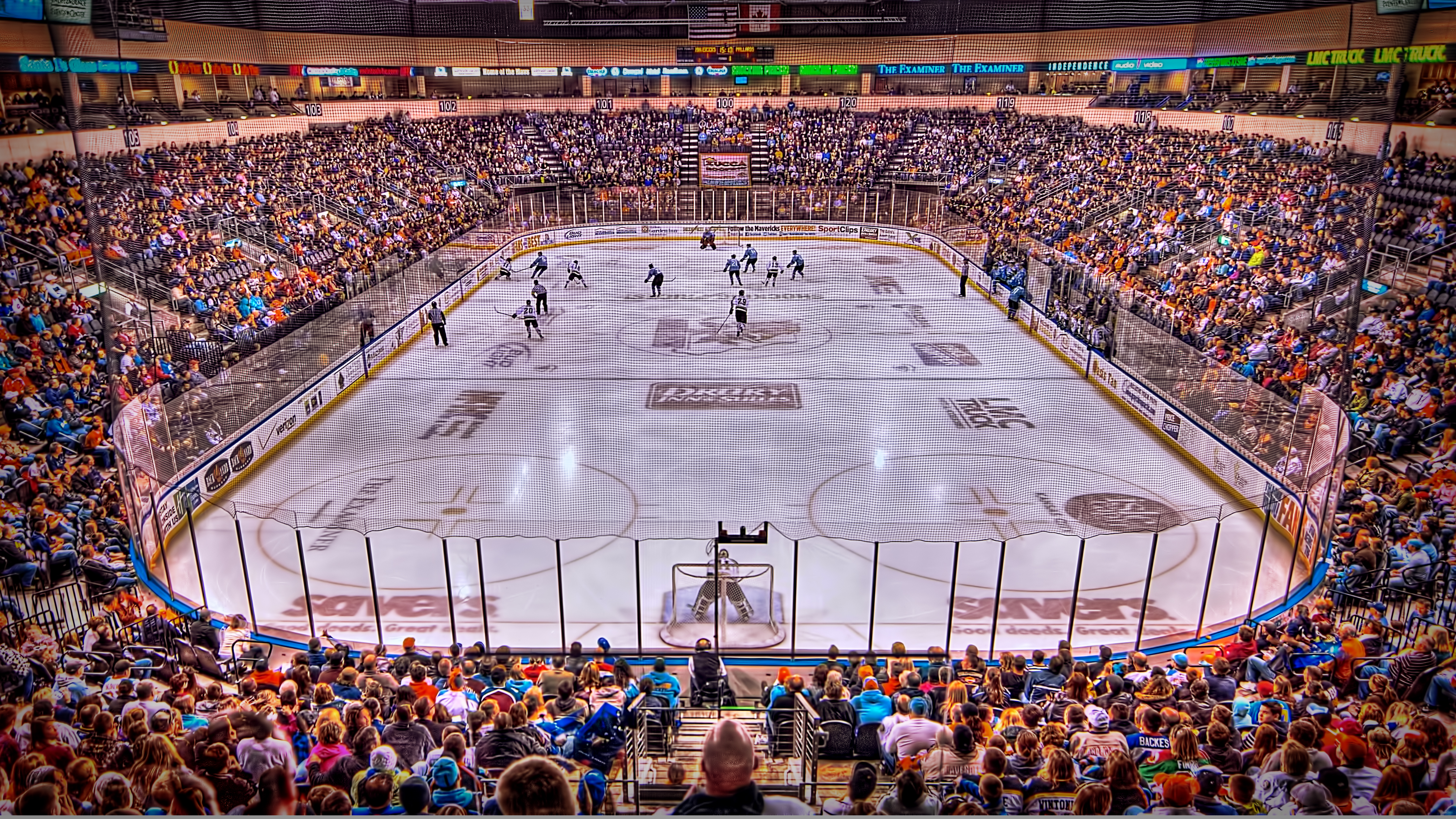 In case you didn’t catch my Facebook post yesterday morning, I have some super cool news to announce on behalf of McCarthy Auto!

McCarthy Blue Springs Hyundai (from Blue Springs, MO) will be the exclusive Automotive Dealership Sponsor with the Missouri Mavericks Hockey Team for the 2013/2014 season!

Pretty cool, eh? We sure do love our Mavs, so sponsoring them is an added bonus! You can find out all the cool team information at www.missourimavericks.com. Make sure you check it out! 🙂 And one last question for you… How do you prepare a hockey rink for the 2013-2014 hockey season? With GoPros and paint cans, of course. Check out this sweet video of the preparation of the Missouri Mavericks Hockey arena! It’s extra cool, because they filmed the time lapse of the event — a process that took 18 hours, beginning bright and early at 7 a.m. on August 30, 2013. The season officially begins November 2 at 7:05 p.m.! Go Mavericks!