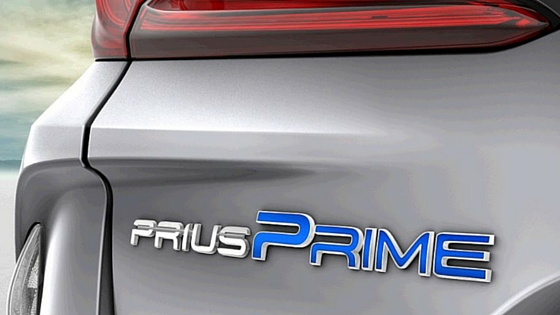 The New York International Auto Show is in full-drive, which means so are the year’s biggest automotive announcements. One of the first new vehicles revealed this morning is the 2017 Prius Prime, which Toyota is dubbing the “best and most technologically advanced hybrid in the world.” Those are some powerful words! Let’s take a look, shall we? Design. The new-generation Prius Prime is 2.4 inches longer, 0.6 inches wider, and about an inch lower than its predecessor. This growth improves cargo room and offers a road-hugging experience. The Prime’s aerodynamic body design cheats wind with every mile, while its high-strength/low-weight structure results in an astoundingly low energy consumption. Automatic grille shutters help reduce drag by closing when airflow to the radiator is not needed.

Energy-conserving quad LED headlights and LED rear combination lamps leave an unforgettable night time signature. Aiding driver visibility is a full-width aero glass panel over the rear spoiler and a standard backup camera. Last, but not least, the lightweight carbon fiber rear hatch—a Toyota first—makes opening and closing almost effortless. EV or Hybrid? Both. You can plug it in, fill it up, or both. On one 11.3-gallon tank of regular-grade gas and a full electric charge, the 2017 Prius Prime anticipates an estimated total driving range of over 600 miles. The class-leading Prime is expected to offer approximately two times the electric range of the previous model, meeting the daily commuter distance of over half of U.S. drivers. Especially impressive is the ability to drive at speeds up to 84mph without ever leaving EV mode. Wow!

Efficiency. The Prius Prime achieves an estimated 120+ MPGe, perhaps the highest MPGe rating of any Plug-in Hybrid on the market. It also exhibits a significant 26% enhancement over its predecessor, greater battery capacity, and an overall improved hybrid system. And I haven’t even scratched the surface! For even more information about the new Prius Prime’s technology, multimedia, mechanical genius, and built-in features, check out the official press release from Toyota.
hybridNew York Auto ShowPrius PrimeToyota