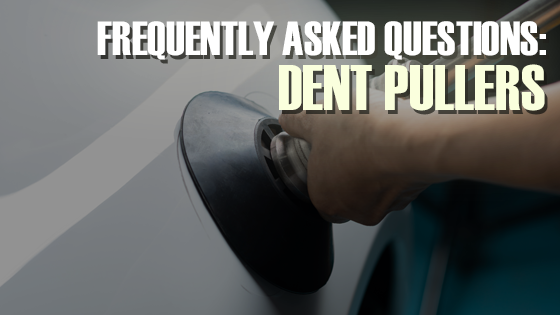 Some goon smacked a shopping cart into your bumper. Bummer. Instead of bringing your vehicle to an auto body shop for a quick repair, you decide to go the DIY route by purchasing a retail dent puller gizmo. But do these cheap dent removal kits actually fix car dents, dings, and dimples? Or are you just wasting your money?

For the most part, these simple dent repair kits only fix minor dings in certain areas of a vehicle. They require the area around the damage to be flat, thin, and flexible, which makes it difficult, if not impossible, to pull a dent out of bumpers, fenders, mirrors, and other angular parts of your vehicle. But, if you have a small depression in your hood or door, these products can save you money on repairs.

Dent pullers are notoriously sketchy when it comes to larger repairs. Oftentimes, pulling out a dent at home will do more harm to chipped or damaged paint. And even if there’s no visible paint damage surrounding your dent, there’s a good chance that your dent remover won’t create a perfect finish. Will it look better than before? Sure. But anyone with two eyes will be able to see the crease.

In some instances, the improper use of dent pullers can even result in what’s called “oil canning.” Oil canning is, essentially, what happens when the metal surface has been overworked and stretched to the point where it is no longer stiff. A clear sign of oil canning after pulling out a dent: if you touch the repaired area, it will pop in and out of place. Although newer vehicles utilize sturdier metals, oil canning remains a risk.

What Type of Dent Puller Kits are Available?

Additionally, you can purchase other dent puller systems that require you to drill tiny holes into your vehicle’s sheet metal. The risks far outweigh the benefits when using these kits, so I’d suggest staying away from them.

Paintless Dent Repair vs. Dent Pullers: Which is Better?

Paintless Dent Repair (PDR) is a certified technique that’s taught to auto body shop technicians all over the country. Unlike generic, cheap dent pullers, which pull dents from the outside, PDR aims to reduce potential damage by pushing indented sheet metal from the inside of a vehicle. This all but removes the possibility of damaging paint.

PDR is better than dent pullers mostly because of equipment and technology. Machines today are computerized to ensure the correct amount of pneumatic pressure is applied to push out each individual dent. It’s also an affordable service provided by nearly every collision repair center in America, and most PDR work can be performed in a day, if not within a couple hours.

Hey, I’m all for people saving money on car repairs — that’s one reason why I have this blog. However, I’m hesitant to recommend the use of DIY dent pullers to anyone but a professional technician. Small dings on an older vehicle? Sure, give that $30 dent puller a shot. Large hail dents on a newly leased car? Just bite the bullet and visit your local body shop for virtually risk-free PDR — and some TLC thrown in for good measure. You’ll certainly save yourself a headache.

Why choose McCarthy for service?

What's the one thing you wish you understood about cars?

Time for an oil change … what do you do?

Identify What Fluid Is Leaking from Your Car by Color

How to Buy the Right Car Tires: 15 Expert Tips